Phil Proctor
Andre Francois Proust was third in command of the ALA during the attack on city of Carthage.

Proust was a close associate of his leaders, Soren Masson and Jean Fournier , they shared their goal of destabilizing the government and the liberation of the island of Martinique. Though he is not a sniper on his fighting skills can be assumed that he has a military training, as well as his two commanders. When ALA attacked the city of Carthage, Masson told Proust to command ALA forces in the streets and subway of Carthage and control the access to the sewage system . Proust was infected during delivery of the Omega Strain virus , but not long enough to feel the effect. IPCA agent Cobra faced Proust in the subway, in the firefight Proust was killed.

Limited intelligence exists on Andre Proust, but Agency field reports confirm him as the third-in-command of the ALA branch known as the Rising Hand. He was a close associate of its leaders, Soren Masson and Jean Founier, sharing their goals of destablizing governments and freeing the island of Martinique.

Though he was not a sniper, Proust displayed combat skills that could suggest military training as in the case of his two commanders. When the ALA attacked the city of Carthage, Masson ordered Proust to control an ALA unit and transfer personnel through a sewer system linked to subway tracks.

Proust contracted the virus while shipping its containers, but did not survive long enough to feel the effects. The Agency encountered Proust inside an area of the subway, and eliminated him having received DPE authorization.

M16K: Proust's weapon of choice, he has good precision M16K, he can easily kill the player.

C4 explosive: When the player kills Proust he drop a C4. 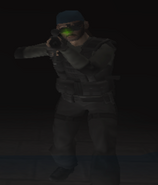