Syphon Filter Wiki
Register
Don't have an account?
Sign In
Advertisement
in: Characters, The Agency, Deceased,
and 6 more

"I discovered why every mission in this investigation has been compromised. The Agency had a leak...at the top..."
"Benton, of course..."
"You knew?!?"
"You are valuable to me Logan, but you are not briefed on all of the Agency's activities. I've known for some time that Benton has been playing both sides."
"How many missions did you send us on, knowing that Benton could've gotten us killed?"
"We do what it takes, Logan...all of us..."

- Markinson and Gabe about Benton

Edward Benton is a character in Syphon Filter and appears in flashbacks in Syphon Filter 3. He was the Deputy-Director for The Agency under Director Thomas Markinson. He first met Gabriel Logan during an Agency operation in Kabul, Afghanistan, along with Ellis. It was due to Logan's abilities during this encounter, that he was prompted to recruit him into The Agency. Incidentally, this encounter also (unknowingly to Logan at the time) gave him insight into the true purpose of the Agency.

He is essentially the second faced antagonist of the original Syphon Filter, acting under Erich Rhoemer's orders as a mole in The Agency, for the Black Baton. It was due to his actions that the botched operation in Costa Rica occurred along with Jenkins and his entire team being eliminated in Washington Park.

Benton is a tall, African American male in his late 40's with short black hair and a stern expression. While at headquarters, Benton is seen in an Agency suit, with a black jacket, tie and dress pants with black dress shoes. He is also depicted in the intro and the cutscene in which he's shown in the office with Markinson, Gabe and Lian wearing shades though he is mostly shadowed so it's hard to notice.

At the Pharcom Exhibit, he's shown to be wearing a dress tuxedo with a blue handkerchief in his left pocket and a blue vest wrapped around a white button up shirt that ends in a black bow tie.

His appearance is not seen during Syphon Filter 3.

A politics major, and later a Master's holder in International Relations, Edward Benton was anything but surprised when approached by Agency recruiters immediately after his graduation from the University of Maryland. This is fitting, as he would later be known for his uncanny precognitive and logistical analysis. He proved to be an expert in tactical command.

Benton spent a great deal of time as an intelligence analyst, first in South America, particularly Argentina and Peru, and later the Balkan areas. In the middle he managed to improvise during the Soviet conflict in Afghanistan -- a convoy of supplies needed to be run, yet the region was hands off, and so Benton posed as a CIA officer and duped a pair of Rangers, named Logan and Ellis, into escorting him. This turned heads in Washington, especially given the pair of grunts' unusual field skills. It seemed Benton could predict useful assets, as well.

It is likely around this time that Edward Benton was approached by Secretary of State Vincent Hadden, who wanted a set of eyes in his Agency that would keep him up to speed on all affairs. Benton naturally, agreed, and ultimately accepted a promotion to Deputy Director in 1999.

Although technically answering to Director Markinson, Benton began to clash with his superior indirectly when Hadden's Consortium would benefit from something that Markinson did not approve. Notably, the first of many examples would be the District of Columbia attacks, which Deputy Director Benton directly aided through leaking of information. Evidently, Hadden stood to gain from a terrorist attack on American soil.

When direct evidence was unearthed by communications officer Lian Xing, she briefed Thomas Markinson, who would later admit that he knew, but did nothing (for reasons few would know until later). All the same, he was quick to issue a DPE for field agent Gabriel Logan, who was able to carry it out with little impasse.

The following information is taken from Page 23 of the Syphon Filter game manual.

Benton first appears in the first mission of Syphon Filter where he and Markinson are briefing Lian Xing and Logan on their mission that is to be carried out on Washington D.C, Georgia Street.

After Logan has carried out the mission, dicovered a fake virus bomb and wounded Mara Aramov, he heads down the street communicating with Lian. As soon as he passes Washington Park, Benton contacts Logan informing him that a fellow agent, Jenkins, and his team have been elimintated by the Black Baton. He orders Logan to go in and disarm the viral bombs in their stead. This leads Logan into suspecting that there is a mole in The Agency.

After Logan has carried out this mission and defeats Anton Girdeux in a battle. Logan requests he investigate the man named Jonathan Phagan, Head and CEO of Pharcom a bio-chemicals industry as well as the manufacturer of the Syphon Filter Virus. He is granted secret permission to investigate and attends a gala that Pharcom holds. Logan then follows Phagan into a museum exhibit that has been rented under Pharcom. Inside he spots Phagan talking with Mara and Benton, with Benton demanding the Syphon Filter virus and Phagan begins stalling. Tired with his excuses, Benton orders Mara to interrogate Phagan while he waits in the exhibit.

Logan talks over with Lian and both decide on taking Benton out. Logan blows his cover and kills Benton, taking his weapon and access card key to enable access further into the museum complex.

Logan makes it through the complex, saves Phagan and incapacitates Mara to take her into custody for questioning. As soon as they return to Agency headquarters Logan and Lian report to Markinson that there was a mole who was leaking information, at the top. Markinson then mentions Benton, leaving Logan questioning Markinson on how he knew.

Although not appearing physically or mentioned in-game. A reference is made to Benton in the Multiplayer map "Pharcom Expo".

Although not appearing physically, Benton is heard ordering Logan on Mission 2 of Syphon Filter 3 in the Costa Rican forest plantation, Lian on Mission 8, and Logan and Ellis on Missions 11 and 12. Benton already worked for the Agency in 1987, as testified by Logan and mentioned in the first Syphon Filter game's manual.

Benton can be hard or easy, depending upon the player's method of tackling. Despite having a flak jacket, holding a G-18 and being very accurate, Gabe can kill him without even getting hit. (Yes, I mean this quite literally, and NO, I'm NOT bullshitting you)

Instead of having the element of surprise others possess (case in point Pavel Kravitch and Jorge Marcos), he is immediately encountered after a cutscene and checkpoint. While Gabe is facing a wall, Benton is directly in front of him, but just behind the wall. The wrong tactic will be to charge out, absorb a few shots, get to cover, score a headshot and lose a substantial amount of Gabe's HP in this process!

Thus, the best plan here is to use the HK-5 and approach the right side of the wall. Be cautious and don't get too close to the edge (as for Kravitch).

Slip until Gabe's right shoulder is almost an inch from the end. Aim down your sights manually and hold 'strafe-right'. Hopefully, you'll have a view of Benton's left side, but no headshot. Don't just run out and nail his brains! Instead, aim the HK-5 at his leg around the knee-cap area and let loose. A few seconds of leg shots, and Gabe will call Lian to inform her that Benton is dead. 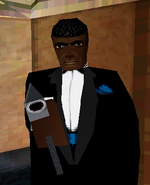 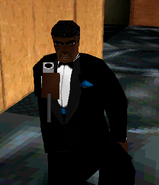