First Investigation of PHARCOM
Lian - "We've analyzed blood taken from Rhoemer's men. It contains compounds identical to those extracted from the plants taken from Rhoemer's plantation in Costa Rica. Compounds patented by a multi-national corporation named PHARCOM. I checked with their contact in the World Health Organization. PHARCOM is also coordinating the W.H.O.'s efforts to track down these worldwide viral outbreaks."

Gabe - "Rhoemer's not sophisticated enough to run this kind of operation. With that arsenal he must have an enormous base of operations somewhere. Who's funding him?"

Markinson - "I have already had PHARCOM investigated. The final report was inconclusive."

Gabe - "Whose report?! Benton's?! The same man who coordinated our botch raid in Costa Rica? The man who got Jenkins' entire team taken out? Where is Benton now?"

Markinson - "I've placed him on leave. Now, what do you want to do?"

Lian - "Phagan is hosting a reception at his exhibition center in New York tonight. I've tapped into their security files and accessed blueprints for the entire building."

Gabe - "Phagan doesn't know who I am. I'll go as a guest and plant a remote wire on him. If there's a connection, I'll find it."

Markinson - "Alright. Report back to me in twenty-four hours. But this is not a standard intercept and eliminate operation. If Phagan is involved with Rhoemer, I want them both taken alive. If you do find a mole, eliminate him."

Jonathan Phagan's PHARCOM Expo Centre Reception in New York is the set for Gabriel Logan's next mission. He is sent to follow  in order to learn about his connection to Rhoemer. This is the first mission on which health regeneration occurs due to not being in Washington, D.C. anymore.

This is your first real stealth mission. In order to complete the first part, you must avoid being spotted. It will thus be essential to make good use of your silent weapons, the 9 mm or the sniper rifle. You must take out the guards using head shots so that they die instantly.

You start a distance behind Phagan. He is walking in a gentle slope and there are two guards at the top of it, one of which will come in your direction. Go to your left and climb the big steps until you get to the higher one. Use the columns there to hide from the guards. First, take out the guard who stayed at the top of the slope (just don't get to close to him, and he won't see you, even if he seems to be looking in your direction). When he is down, go take his place and look down the slope. Head shot the second guard who stopped at the bottom.

Enter the corridor at the top of the slope and turn left. You'll immediately see a guard walking towards your right. Go in manual aiming mode and shoot him in the head. Fallow his steps and enter the Stone Hedge exhibit. There is one guard located at the back of the room. He's going back and forth in front of the corridor leading out. Use the stone pillars to avoid detection and take him out when he stops. (Also, make sure Phagan isn't anywhere near him when you do so, or he'll hear you) Keep going until you reach the Ancient Egypt exhibit, but stop before you enter the room. One enemy is patrolling in front. Use your sniper to take him out. Enter the room and turn right. Stay hidden behind the closest column and wait while aiming at the corridor ahead. After a short while, a guard will turn the corner. Quickly take him out before he sees you. Keep going and turn that same corner. Go in manual aiming right away because one last enemy will walk in front of you. Take him out and keep walking until a cutscene starts.

The scene ends with you being trapped in another Ancient Egypt room along with Benton. He is armed with a G-18 and wears a flak jacket. As soon as he sees you, he'll run and take cover. You have few chances to defeat him while he is moving. He'll quickly shoot at you while running. You must slowly and silently come closer to him when he hides somewhere. Make sure you have a good angle, while being hidden behind something. Then go in manual aiming, take a step aside (pressing L2 or R2 accordingly) and go for a quick head shot. If you miss, make sure you're well hidden while Benton runs to another spot, and start over. Grab the security keycard and his weapon when he falls.

From here, you don't have to worry about stealth anymore - you can now break out the heavy weapons. Head for the right corner at the bottom of the room, and use the keycard to open the grid. Open the door to your right (press Triangle in front of it). There are two enemies in the next room, which is built in height. Take cover behind the big statue to your left. Take the enemies one by one. When you are done, climb on that same statue, and again on the catwalk above your head. Keep going up until you reach a large vent. Shoot the lock to open the grid and enter in it. Follow the only path available up to the next grid which you can open again by shooting the lock.

You are now on the top of a big Aztec pyramid. To the very bottom is an enemy wearing a flak jacket. Another (with no armor) will be firing at you from a corridor which is at your level in front of you. Take them out (there was a box containing a HK-5 back in the vent). When you want to climb down the pyramid, go to the stairs and Gabe will slide all to way to the bottom. The guard that was at the bottom was also carrying a keycard. A few guards will attack you as soon as you touch the ground, so be prepared to face them. When the area is cleared, climb back to the top of the pyramid (from the sides) and activate the switch you'll find near the vent entrance. The gate it opens is located at the bottom of the pyramid, at the end of a corridor to the right. As soon as you've activated the gate controls, slide to the bottom of the pyramid and turn right. Hurry to the grid and roll under it if necessary. Keep going until you reach the next room.

There is one guard in this room and another located in a corridor high above might also see you. Eliminate the one above first, then deal with the one down with you. This one is armed with a G-18 and wears a flak jacket, like Benton was. Take him out and pick up the security card he had. Open the gate and head for the next room.

This next room has a tall space rocket replica in the middle of it. There are a few guards in there, two on the same your level, two others on the lower floor and finally one on a catwalk above. There is a small elevator to the left of the rocket. Go on the platform and manually aim above the elevator switch that has sparks coming from it. Shoot it to go up. You'll reach the catwalk where there was a guard earlier. Follow the corridor, while dealing with the two enemies you'll come across. You'll pass in front of the pyramid you were on earlier. You should ignore the enemies shooting at you and go to the end of the corridor in order to collect the security keycard (checkpoint). Now that you have your checkpoint, you can take down the enemies or just come back to the elevator. You'll come across another guard on your way back. Use the elevator to go all the way down (just press Triangle twice).

Once on the lower floor, open the door (press Triangle) in front and you'll be in a locker room. There are two guards there. Take them out. You can take a look at the lockers: one contains a G-18 and another has a flak jacket in it. Head for the next door that will lead you to the Mars Exhibit. Eliminate the enemies firing at you from the corridor ahead. Then climb to that same corridor and head right. Use the control panel and the keycard to open the gate.

You'll reach the Moon Exhibit. First, take out the enemy standing in front. Before you go down on the exhibit floor, take the K3G4 from the box at the end of the corridor. Also eliminate the guard down in the exhibit who is wearing a flak jacket. When you'll set foot in the exhibition floor, another guard equipped with a flak jacket will attack you from a catwalk above your head. Using the K3G4 against him isn't a bad idea, because you don't have a good angle to his head. Climb on the lunar module replica in order to reach the catwalk. Head left and you'll meet a last guard after you turn the corner. He also wears armor. Take him out and approach the door to your right 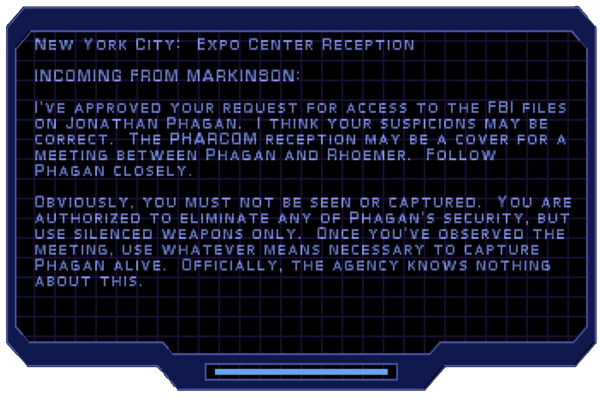