The Georgia Street Terrorists are an enemy type in Syphon Filter. They are members of the Black Baton and act as the foot soldiers during the Washington D.C. Attack committed by Erich Rhoemer. They are in part led by Pavel Kravitch, Rhoemer's communications expert but are otherwise only featured in the mission Georgia Street.

The terrorists only speak if a grenade is thrown at them. They have American accents.

The standard terrorist is shown wearing a pair of dark-tan pants equipped with combat boots. A sort of black vest (likely holding ammo for their weapons) is worn over a white t-shirt, almost appearing like suspenders. They all wear a signature ski-mask, with a white lining along the eyes suggesting they may be wearing a form of goggles.

Erich Rhoemer along with Anton Girdeux, Mara Aramov and Pavel Kravitch lead an attack on Washington D.C. or specifically, Georgia Street. As Gabriel Logan arrives on the scene, multiple terrorists climb over a wall charging towards CBDC Agents engaging in firefight.

Gabe (and even the CBDC unless outnumbered) are shown to easily overcome these foot soldiers, as their skills with firearms are rather low. It's possible to complete the first mission without ever being hit by a bullet. All of the terrorists are fairly poorly equipped, with none having a Flak Jacket and all dying in just a few shots. They provide a simple obstacle for Gabe to overcome as he eliminates Kravitch and continues on his mission.

These terrorists are all wiped out by the end of the mission, last seen in the D.C. Subway system before it is detonated by a bomb. They are replaced with Girdeux's Terrorists for the remaining missions in Washington D.C.

Black Baton with 9mm (9mm below soldier is a coincidence) 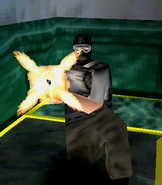