Girdeux's Terrorists (or simply Terrorists, as referred to in the multiplayer for Syphon Filter 2 and Syphon Filter 3) are an enemy type in Syphon Filter. They are members of the Black Baton and make up the bulk of the strike force during the Washington D.C. Attack. They appear to be under the command of Anton Girdeux (as he was leading the "Park Operation") and Mara Aramov. They are featured in the missions Destroyed Subway, Main Subway Line and Washington Park.

The standard terrorist is shown to be wearing a tan-camouflage uniform with a black vest (which may or may not represent a Flak Jacket, depending on the terrorist) worn over the chest. The vest itself appears to have various pouches for munitions, with what appears to be a spot for a nametag (however, the game's resolution makes it appear to just be a white bar). A black belt can be seen worn over the pants, with a holster-and-strap equipped to the left leg just above the knee. A pair of black combat boots and gloves are worn in conjunction with the rest of the outfit, while a black ski-mask with open eyes covers each member's face. They all appear to have brown eyes.

While not technically equipment or a weapon, it is a particular variant that occurs at least twice:

Erich Rhoemer along with the Black Baton force an attack on Washington D.C., first at Georgia Street then the underground Subway system beneath the streets. These terrorists arrive shortly after one of the Viral Bombs ends up being an explosive, linking to the entire subway system resulting in ten square blocks of downtown D.C. sinking beneath the surface.

Gabriel Logan fends them off as he makes his way through the Destroyed Subway and again as he chases Mara Aramov through the Main Subway Line. While in the subway, he discovers that the terrorists are heading to Washington Park and tells Lian Xing to send Jenkins and his team to check it out. They are overwhelmed by an ambush, as the group was informed by Edward Benton thus preventing their own casualties.

As Logan reaches the park, he finds out that the terrorists have set up several Viral Bombs in the area and Gabe aides CBDC in defusing each one while killing off various terrorists. Among these terrorists is the Triggerman Jorge Marcos and despite the other Black Baton guarding him, he too is killed.

After Gabe defeats Anton Girdeux, any surviving terrorists either flee or return to Rhoemer's Base to act as Personnel there or at the Stronghold. 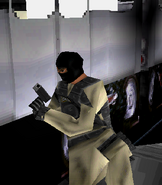 Terrorist with 9mm in front of train. 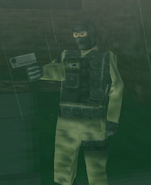 Terrorist in park with .45 aiming at CBDC 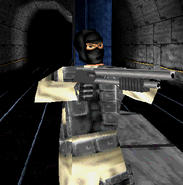 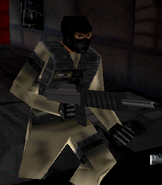 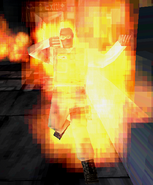 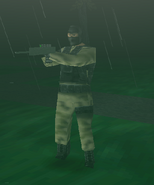