How many men did you kill to get here? All of them, they were just doin' their jobs, did they deserve to die? I'm just doin' what I was trained to do!

Jason Chance was the secondary and hidden antagonist of Syphon Filter 2, in which he also played the role of final boss. He was a double agent who seemingly acted as a CBDC member but his true loyalty was to the Agency.

"There's just one guard out there. Does that seem right to you?"

Jason Chance was an Agency operative assigned to undercover missions as an Army Lieutenant in the Chemical and Biological Defense Command. He had a history with the military for being a West Point graduate and fighting in the Gulf War where he received the Bronze Star. Afterwards, the U.S. Army bestowed him the rank of second lieutenant and his presumable career with the Agency began alongside enlistment with the CBDC.[1]

The unit commanded by Chance was active against the terrorist forces of Black Baton, of whom Erich Rhoemer was in charge, and his biological attack on Washington, D.C. [2] Chance would later join Gabriel Logan and Lian Xing in Kazakhstan to secure crates of the Syphon Filter virus stockpiled by PharCom. The CBDC agents joined Logan on the flight to the United States, only to have the C-130 transport shot down in Colorado. Chance kept Agency commandos informed on Logan's progress to recover PharCom data discs, and maintained his cover.

When Logan arrived at the Agency's New York labs to trade data for Lian Xing's vaccine, director Lyle Stevens used Chance's association with Logan as a ploy in case Logan escaped custody. Chance dressed as a test subject and eliminated CBDC agent John Ramirez after Logan released him from a cell. He reported to Stevens and patrolled the rooftops surrounding the laboratories while wearing full-body ABS armor.

Chance encountered Logan along a parking garage roof attempting to escape by helicopter. He was able to wound Teresa Lipan, but Logan shot Chance into the helicopter's rear rotary blades using a UAS-12 rapid fire shotgun and evaded the Agency.

When facing Chance on the parking lot, be sure to avoid his sight. He has incredible accuracy and is armed with the deadly UAS-12 semi-automatic shotgun, which can make quick work of the player (Note: It is NOT recommended to hide behind the cars in the parking lot for Chance can destroy them with his UAS-12). If the player wants to defeat Chance traditionally they should run to the helicopter located in the middle of the parking lot and retrieve the UAS-12 in the weapons crate inside - whenever the player shoots Chance with another weapon (excluding the M-79 and Shotgun) no damage will be inflicted and Chance won't be knocked back, instead Chance will stumble for a brief moment from the bullets. The standard Shotgun will knock him back but it does not have the sustained fire to push him any farther than he can run to recover, making it a good option for keeping him at bay until you can get the UAS-12.

The player should then try to lure Chance near the rear of the helicopter (Note: Be careful near the rear, for Gabe can himself be killed by the blades as well) to be able to shoot him into the rear rotary blades where they will slice through him, regardless of armour and kill him. Alternatively, if the player still has any remaining M-79 grenade launcher ammo with them they can use the M-79 to knock Chance into the rotary blades. Nonetheless, this is not recommended because:

Should the player run out of bullets they can retrieve another UAS-12 from the same weapon crate, likewise with Flak Jacket armour if the player loses any armour a weapon crate on the opposite site of the helicopter can be found.

"When the transport plane arrived, I sent YOU up to secure it and Lian got captured. YOU turned her over to them."
"I told them where she was and secured the test subject for transport. Just doing my job Logan, that's all - MY JOB!"

Initially posing as a apparently kind-hearted character who served as Gabe's sole source of support following the loss of his arsenal in a rockslide Archer instigated, Chance was subsequently consistently portrayed as a cunning, though timid and cowardly, individual whose actions bordered on a textbook example of sociopathy. Not merely indifferent and aloof, he was prone to consummate deception and manipulation; his all-too-convincing act enabled him to slip under the radar of others' suspicions. Notably, he displayed characteristics of an emotional manipulator that lacked any conscience or human feeling. When the truth became clear to Gabe and he was cornered, he demonstrated the definitive sociopathic trait of employing mocking sarcasm to deflect responsibility from himself, claiming that he was 'just doing his job' even when it became obvious he had told the Agency where Lian was, and knew Gabe's location right from the start.

Even before his true endgames became clear to those around him, there were subtle hints indicative of Chance's deceptive nature, such as his informing of Agency commandos on Logan's progress to recover PharCom data discs, and maintaining his own cover. He expresses no regret over the scores of Agency mooks he kills in the Colorado missions (which ironically makes him a hypocrite since he tried to chastise Logan for the exact same thing at the end of the game) by referring to them as "expendable." When Logan tried to negotiate for Lian Xing's vaccine, Agency director Lyle Stevens exploited Chance's relationship with Logan, using it as a ploy in case Logan escaped custody. Chance disguised himself as a genuine test subject and eliminated CBDC agent John Ramirez after Logan released him from a cell. He later reported to Stevens and patrolled the rooftops surrounding the laboratories while wearing full-body ABS armour. Last but by no means least, during Gabe's and his final battle, Chance's taunts even hinted that "Ramirez thought that Logan had betrayed him."

Chance's 'co-operation' with Logan was in fact something the Agency had plotted right from the start. His deceptions ranged from pretending to be affected by "concussion grenades" (which was seemingly Morse code for Agency pilots) and working with Logan to kill his own Agency men to "actively being locked up with Gabe in case the drugs the Agency had to interrogate him didn't work". However, when the puzzle was eventually unraveled, he tried in vain to justify his actions. He was ultimately killed when Logan blasted him back into the helicopter's tail rotor, a decision that cost him his life. 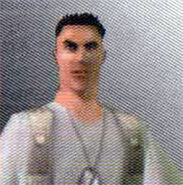