Jesse Caceres
John Ramirez is one of the CBDC agents to accompany Gabriel Logan in the C-130 carrier plane, and can be considered a minor protagonist. He is also one of the sole survivors after the Colorado incident.

Ramirez is initially encountered in a cave that Logan says is unstable. However, Logan speaks to the other CBDC agent present, Eschelman, instead of him. The cave later partially collapses due to an M79 attack by an agency spook. Ramirez survives but is upset that Eschelman has been killed. Logan tells him to forget about it, and orders him to keep other agents out of the cave. After Logan is able to clear the cave-in, he sends Ramirez down the mountain to meet up with Chance.

Soon after, both agents are encountered by Logan who saves them from their captors, all three of the men then make it through an onslaught of spook commandos and make to it to a highway bridge. Once again, Logan orders them to stay put and rendezvous with Jason Chance located near the highway. Suddenly, Archer appears once again in his helicopter and fires two missiles at the men, all then attempt to jump out of the way. Logan lands on the United Pacific train, while the fate of both the CBDC agents remain unknown.

Ramirez is once again encountered in the Agency bio-labs as a prisoner and in poor health. Logan once again dispatches his captors and questions Ramirez, revealing Thompson had died from the bridge incident and only he and Chance survived. Logan tells him to stay put until he released Chance and completed his mission. Once Logan had finished his mission, the Agency bio-labs had been put on high alert, Logan dashes through the complex to Ramirez's cell, finding Ramirez dead, having been killed by Chance.

After certain events of Syphon Filter 2, Chance's real motives have been revealed, Logan and Chance enter a showdown, Chance taunts Logan by saying: "Ramirez died thinking you were the one who betrayed him!"

Ramirez also appears in Multiplayer mode as a playable character.

John Ramirez was a soldier of the U.S. Army Chemical and Biological Defense Command, attached to the unit of Lieutenant Jason Chance. The CBDC traveled to Kazakhstan after receiving a signal from Gabriel Logan, and sided with him against the Agency. Logan placed Ramirez in charge of securing PharCom data discs when operatives Dillon Morgan and Derrek Falkan abducted Lian Xing.

Ramirez was one of the survivors of the Agency's attack on a C-130 transport, and he hid inside a cavern with fellow soldier Eshelman. He escaped several Agency ambushes due to Logan, including a sniper attack that wounded CBDC GI Ferguson. The same soldier would later die, forcing Ramirez to go alone and end up captured by Agency commandos alongside the GI, Thompson. Logan saved him again before an Agency bombardment separated the two.

The Agency brought Ramirez, the only CBDC soldier remaining besides undercover agent Chance, to the New York laboratories for tests with Syphon Filter. Logan sent Chance, believing him to be trustworthy, to free Ramirez from custody, but Chance executed him inside the cell and admitted to Logan that Ramirez thought he [Logan] was responsible for betraying the CBDC. 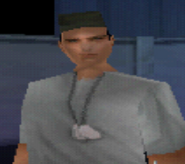