After Mara shot Phagan in the head, he was brought to McKenzie Air Force Base on a life support system, whereupon Phagan perished when Morgan deactivated the machine.

Lian Xing, I don't think this is an abandoned silo. There's an R-9 Devyatka sitting here ready to launch. Phagan was planning something big.

Jonathan Phagan is a secondary antagonist in Syphon Filter. He can be considered to be the creator of the Syphon Filter Virus. He is the founder and CEO of PHARCOM, a chemical organization.

Formerly involved as a Vice President to the corporation Wyn Industries, Phagan used substantial monetary resources to establish the multinational biotechnology and pharmaceuticals company PHARCOM. Although initially motivated by a fascination to collect artifacts of ancient civilisations, his company's research, whether or not he was knowingly aware, enabled the creation of Syphon Filter as a biological weapon for terrorism purposes. Phagan recruited top scientists into his project, and constructed global laboratories.

After beginning his association with the Consortium, Phagan cooperated with Erich Rhoemer and his international network of terrorists to use their army and test viral samples of Syphon Filter. Both factions conducted research on prisoners and Phagan shipped the infected specimens across borders under the cover of transporting artifacts to PHARCOM's Exposition Center in New York City.

Mara Aramov and Edward Benton turned on Phagan following the Washington, D.C. terrorist assault, attempting to uncover the location for PHARCOM's laboratories. His subsequent escape led to imprisonment by Rhoemer in a Ukrainian stronghold, and he became infected from a new phase of the virus. Although he implored the Russian to spare him, Aramov shot him in the back of his head when he tried to exit the stronghold catacombs, apparently killing him, but the Agency subsequently recovered Phagan, revealing that he was in fact incapacitated.

Agency operatives and PHARCOM researcher Elsa Weissinger kept Phagan on life support until his delivery to McKenzie Airbase in Colorado. The medical personnel extracted his plasma and the incubated virus within it for future tests beneath New York. Weissenger's pleas to keep him alive so they could further research the effect of the virus on him fell on deaf ears, for Agency commander Dillon Morgan cut off Phagan's support and killed him, keeping both the authorities and PHARCOM from finding him with an unknown pathogen.

Phagan first appeared in the original Syphon Filter. When Gabriel Logan was working with the Agency, they suspected Phagan of distributing the Syphon Filter Virus, Logan's orders were to attend an expo Phagan was holding and interrogate him. After following Phagan into an museum exhibit nearby where the expo was taking place, Logan spots Phagan talking to Edward Benton and Mara Aramov, while Logan listens to Benton and Mara question Phagan on the virus. Unsatisfied with Phagan's excuses, Benton orders Mara to interrogate him herself while he stays in the exhibit. Logan, talking things over with Lian Xing, decides to kill Benton and goes through the entirety of the complex to find and question Phagan. After going through the complex Logan finds Mara holding a gun to Phagan's head demanding for the Syphon Filter Virus. Phagan desperately attempts to bribe her; however Mara simply laughs and refuses the offer, ready to kill him. Before Mara can pull the trigger Logan incapacitates her and Phagan flees while Logan recovers Mara for further questioning.

Before Logan can find Phagan he is assigned to infiltrate a secret bunker of Rhoemer's to disable missiles inside. After Logan had finished his mission Lian is kidnapped and assumed to be dead. Soon after, it is discovered Phagan had been captured and placed in one of Erich Rhoemer's secret strongholds, in reality a cathedral taken over by Rhoemer's men with test subjects for the Syphon Filter Virus. Logan is ordered first to inject the surviving victims with an antigen and eliminate any of Rhoemer's scientists. After completing his mission Logan manages to infiltrate the catacombs of the stronghold where test subjects of the Virus were being held. Logan follows a scientist to Phagan's cell where he kills the scientist. Phagan, wanting to live, tells Logan Lian is still alive and offers her whereabouts in the catacombs. Logan accepts the offer and after finding Lian, Phagan flees the catacombs. After Logan and Lian escape the catacombs they spot Phagan near the exit begging for his life, suddenly a bullet is shot through Phagan's head and Phagan falls to the ground, presumably dead. The assailant is discovered none other to be but Mara Aramov, who had escaped the Agency's custody. Mara then informs Logan and Lian that Rhoemer's men are having conflict at one of Phagan's warehouses and Syphon Filter infected bodies in Viral carriers reside there. Logan, unsure if he should trust Mara, goes anyway.

Soon after it is revealed that a huge battle is ensuing between Rhoemer's soldiers and Phagan's guards, Logan running through the crossfire manages to track down the Viral carriers and ventures deeper into Phagan's warehouses, there he discovers Phagan had a more ambitious plan, as a huge Russian war missile is hidden inside.

After the missile launches, Gabe engages its self-destruct system and it explodes in mid-air; Rhoemer, infuriated, starts a fight with him but is killed with a gas grenade. Logan discovers the Agency's true motives but Phagan's intentions remain unknown for how he gained possession of the missile and his reasons for using it. The only thing Gabe knows is with Phagan, Markinson and Rhoemer all gone they may never know. CBDC then arrive to collect Syphon Filter Virus related evidence at the warehouses, thus leading to the events of Syphon Filter 2.

He is seen in the McKenzie Airbase Interior, accused of being terrorists by The Agency to the oblivious, yet suspicious, Military Police (MP), along with other captured enemies of the Agency.

Despite being shot in the head, Phagan is last seen on a life support system, but is brain dead, due to Mara's bullet in Syphon Filter. Dillon Morgan and Dr. Elsa Weissenger both walk in, discussing the eventual fate of Phagan. Morgan wants to pull the plug on Phagan's life support, as leaving him with PHARCOM may let the scientists discover the virus in their former CEO; Weissenger protests that he be kept alive to further discover the effects of the virus, but to no avail. Phagan dies of his injuries when Morgan deactivates his life support.

He also appears as a Multiplayer Character and dons his Syphon Filter Virus test subject robes from the original Syphon Filter.

If Phagan was smart enough to make a complete set of backup data on the Syphon Filter project, he wouldn't have been stupid enough to store the encryption codes in the same place.

Phagan was a somewhat cunning individual. While he was apparently unwary that Edward Benton had appeared at the Expo Centre, and also knew nothing of Mara Aramov's allegiance shift to Black Baton following the failed assault on Washington, he had a complete set of backup data on Syphon Filter. 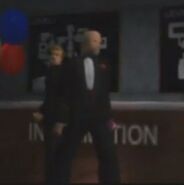 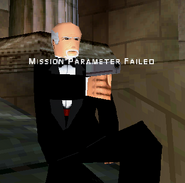