Gabe: Check Rhoemer's file and see who he's been using as trigger man. I'll bet these bombs are set with a backup mobile detonator.
Lian: Got it! Jorge Marcos.

Jorge Luis Marcos is a minor antagonist in Syphon Filter. He is a member of the Black Baton, acting as the Triggerman for Erich Rhoemer as a backup plan to the Washington D.C. Attack. He works directly for Anton Girdeux, during the Park Operation.

Marcos is initially unknown until Gabriel Logan reaches the Communications Array, where he is able to figure out the identity of the triggerman. He is also apparently "ghosting" the radio frequency, thus making it difficult for The Agency to pinpoint Anton Girdeux's location.

According to some sources, it's said that Erich Rhoemer was going to kill Jorge himself provided that Gabe hadn't beaten him to the punch... it is unclear for what reasons, but apparently Jorge was "displeasing" in a sense to Rhoemer's eyes.[1]

Jorge is a young Spanish man appearing to be in his late 20's to early 30's with mid-length wavy brown hair and dark brown eyes. He wears a tan sweater over a black shirt and black gloves, featured with black pants and combat boots. Around his waste he has a silver belt likely for ammo and a similar attachement on his left leg high up on the thigh. He is also equipped with a Flak Jacket under his uniform and a .45.

Jorge is first mentioned by Gabe when he dismantles the communications equipment atop of a particular art structure located in the Washington Park. By doing this, Marcos is cut off from contact with Girdeux and reinforcements...thus leaving him with very few underlings and basically alone. It's revealed to Gabe that he's the triggerman and it becomes one of his active objectives to eliminate Marcos. It's not until Gabe reaches the hedge maze and deals with a few underlings, Jorge reveals himself by fire-and-run tactics. This said, he retreats while firing off his .45 until he can find cover deep within the maze. It is his hope, based on his cowardish actions, that his other underlings will deal with Gabe but it's this underestimation that leads to his death.

Gabriel locates Marcos, whom upon noticing Gabe fires away frantically but with surprising accuracry. Gabe returns fire by shooting a bullet into Marcos' skull, killing the Triggerman and completing his objective. Upon his death, it's revealed that he was ghosting the frequency that would pinpoint Girdeux's location...which was revealed to be inside the Freedom Memorial

Along with various other characters from the first Syphon Filter game, he is included as a playable character in the second installment's multiplayer mode. In order to become playable, the player must first complete the C-130 Crash Site level in less than three minutes. This also unlocks Anton Girdeux, Jonathan Phagan, Vadislav Gabrek, Erich Rhoemer, and the Evil Scientist.

Marcos was a member of the Black Baton terrorist organization tasked with carrying a trigger for Erich Rhoemer's viral bombs on an attack of Washington, D.C. Believed to be a recruit brought in through Rhoemer's network of criminal associations that spread into South America and Europe, Marcos was one of several foreign terrorist figures that were complicit in the operation.

Rhoemer trusted Marcos with the responsibility of detonating the bombs of Syphon Filter should the terrorists lose ground to police forces. Agency operative Gabriel Logan reached the Washington Park where Marcos hid and monitored radio frequencies. Logan used the same uplink dish to identify Marcos, who became fearful of triggering the bombs and attempted to fight. Logan cornered Marcos inside a hedge maze to eliminate him and proceed to Anton Girdeux. Speculation reveals that even if Gabe had not killed Marcos, Rhoemer would have eliminated him anyway due to his cowardly attitude.

Cowardly and frightened of combat for whatever reason, Marcos was one who ran from confrontations instead of facing them head-on. This behaviour was possibly something Rhoemer hated, and he endeavoured to take Marcos' life even if Gabe himself failed to do so.

Jorge comes equipped with a standard-issue Flak Jacket like most distinguishable members of Rhoemer's group. Just as any other jacket, it can be penetrated after extended fire and thus will eventually wound Jorge.

The weapon is first introduced earlier in this mission, but doesn't really set him apart from the standard weapon-set for the rest of the terrorists. He fires it in urgency as compared to his fellow terrorists, running away instead of forcing himself into combat and has an above average accuracy using the weapon against Gabe. 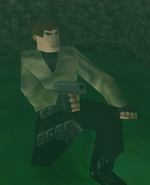 Marcos as he appears in SF2's multiplayer.