"I recognise Anton Girdeaux and Mara Aramov. Who's the other one?"
"Pavel Kravitch, Rhoemer's communications expert."

- Lian and Benton about Kravitch

Pavel Kravitch is a character featured in Syphon Filter. He was a Russian terrorist and communications expert for the Black Baton as well as a close subordinate of Erich Rhoemer during the 1999 DC bombing operation. Although he was reputedly skilled in communications and electronics, Kravitch handled firearms poorly and thus met his untimely demise at the hands of Gabriel Logan.

Kravitch has no distinguishing characteristics that set him apart from any Black Baton terrorist that was apart of the Washington DC Bombing. He wears the standard black ski-mask, the black cargo pants as well as a white sleeved shirt that appears to have overall straps on the sides. In contrast to the final game, his actual uniform differs in the demo where he is given something far different than his underlings. His age is unknown, but based on his Russian dialect, he would appear to be over the age of 30.The outfit worn in the demo is that of a desert camouflage uniform equipped with a black vest (potentially the Flak Jacket), a black ski-mask with his eyes shown plainly and a portable headset worn on the right ear.

Intel is limited on Pavel Kravitch, but it's clear that his expertise in electronics equipment and communications technology allowed him to quickly ascend the ranks to a position of knowledge and power within the Black Batons. A man of Eastern European descent, analysts place him from around Azerbaijan, profiling him as a man with a need to destroy things that are powerful, meant to symbolize Russia (or the United Soviet Socialist Republic).

Kravitch appeared to have a military background based on apparel and combat ability. Experience is predicted near nil. Possible armed forces wash-out.

Pavel Kravitch was the communications officer keeping tabs on the Park, subway, and downtown assaults and reporting directly to Rhoemer. It is likely logistical intelligence was passed to him from Deputy Director Benton, and then to Girdeux, making Kravitch an effective buffer of liability. DPE issued by Edward Benton, creating murky hypothesis. Leading theory is that Kravitch was deemed an acceptable casualty given the streets' failed ambush, his dangerous knowledge of Agency-Black Baton liaising and his minimal combat value.

At the time of DPE execution, Kravitch was hidden in popular tavern The Place. Connections to Black Batons or corrupt Agency personnel are pending investigation. Direct accounts from the agent on scene, Gabriel Logan, place Kravitch as having little time to fortify the pub, with scant men to guard the scene and no jamming equipment in place. Logan carried out the DPE and cited no to minimal problems.

When he's first introduced, he is seen walking in a video surveillance footage taken within the Washingon DC Subway station. Benton explains to Lian, whom did not recognize the man, that it is Pavel Kravitch, Rhoemer's communications expert. Benton gives the order that once Kravitch is eliminated, that his communications uplink must also be destroyed.

Upon starting his mission, Lian informs Gabe over a comm unit that she's identified Rhoemer on Level 1, Girdeux on Level 2, but has no sign of Kravitch or Aramov. Gabe makes his way into a restraunt after dealing with various Black Baton terrorists as well as assisting the CBDC, from which he locates Kravitch after Lian informs him of an interference in their communications...he's hiding behind a bar.

Keeping his distance while firing with a 9mm Handgun, Kravitch ducks and covers behind the bar...moving out from his cover to try and attack Gabe before returning once more. He begins to speak in Russian. As Gabe closes in three more men appear from where he came, so Gabe quickly turns his attention to killing them...before returning to see Kravitch once more hiding behind the bar. Gabe pulls out his 9mm and fires a bullet at his skull...thus killing Kravitch.

Kravitch is the first enemy Gabe encounters who wears a Flak Jacket, so upon shooting him in the chest it's revealed that he can't be hurt. Through repeated firing the vest can be penetrated, however skilled players would score a headshot instead.

Standard issue and nothing special amongst lesser Black Baton terrorists. He fired it from behind cover and occassionally would pop out to try and pick off a shot. Fortunately for Gabe, his accuracy was so poor that it hardly landed a shot (the player would literally have to stand still for 10 seconds just to get hit).

Unique to a particular demo featured in the Interactive Sampler Volume 10 disc, Kravitch is equipped with not just a different outfit (and standard Flak Jacket), but also a Shotgun. This makes him more of a menacing threat as opposed to his final version due to being able to deplete Gabe's flak jacket in one hit, meaning two direct hits would be fatal. His behavior however is the same and he refuses to move from behind the cover of the bar, even if Gabe stands next to him.

Kravitch is easy, well, depending on how you handle him. He's a computer geek - and the first legitimate boss - so you can't exactly blame him for not being painfully difficult. However, he's still the first hard enemy you'll fight, and if you don't take him down fast, he won't hesitate to plaster your innards all over the wall.

Note that he has a flak jacket, so body shots are pointless. And as any hardened Syphon Filter veteran should be keenly aware, headshots are the key to defeating an armoured enemy. Even if you aren't that good at them, there's an easy trick to it...Yeah, you guessed it. Spray and prey.

Kravitch is hiding out in the bar. As you approach a wall that leads you to the right, you will see some tables. Time to slow down a bit. Kravitch is on the opposite side of the saloon, behind the bartop. If you rush in, he'll at the very least be a minor inconvenience, and at the worst case, WILL kill you.

Now, you could technically use the good old "hide and take your time to get the perfect head shot" technique when he sees you. The catch is, he has bodyguards, and after exchanging some bullets, he won't hesitate to bring them in - which not only dramatically slow your progress, but ALSO weakens you as well.

So, get a fast gun out, preferably the M-16. As you approach the wall, face it and strafe to the right until your right shoulder is an inch or so from the edge of the wall. Syphon Filter graduates will be familiar with the peek-a-boo technique. Go into manual aim, and hit 'strafe right'. You will peek around the corner. Gabe is the same height as Kravitch, so don't bother vertically adjusting the reticule. Just sweep it left to right, letting out a burst of slugs. One of them will drop Kravitch like a sack of potatoes. 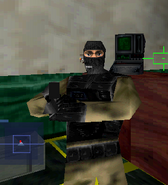