Makarov Pistol
Rodion Ushakov was one of top 4 lieutenants of Mikhas Ivankov and his tank Commander.

During the assault of the IPCA on the CDP base, Ushakov was in his tank trying to take out the IPCA operatives, but the agents were able to complete the DPE order on him. 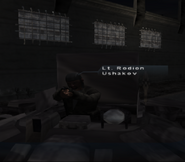 Ushakov on his tank.