Spooks are a group of enemy combatants in Syphon Filter 2. They were elite squads of Agents from The Agency under the command of Steven Archer to hunt down and kill Gabriel Logan and the G.I. Commandos shot down over the Rocky Mountains.

Although they killed many members of the team, Logan and John Ramirez survived.

The normal Spooks were soldiers with "average" abilities when it came to the use of firearms. Many missed their shots, though those equipped with sniping weapons were superior shots. They each wore a black ski-mask with a black vest over grey-camouflage equipped with black combat boots and gloves. A few were also given Flak Jackets.

The Elite Spooks are "Archer's best men". They are far more deadly with their weapons, able to pull off direct hits easily and many are skilled in getting headshots. Most if not all wore Flak Jackets under their clothes, which consisted of a SWAT-styled helmet complete with visor, purple and black full body armor with protection being primarily in the chest.

Spooks had access to various weapons rather than just a basic standard. Their most common weaponry consisted of 9mm handguns and M-16's. 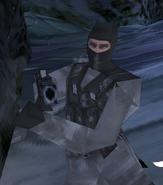 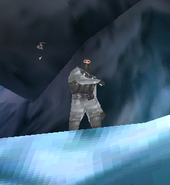