Jay Styne
"Blow it. They're expendable! I don't want Logan getting off this mountain, and we've gotta get to that crash site now! Blow it!"

Steven Archer is a minor antagonist in Syphon Filter 2. He reported directly to Dillon Morgan as a lieutenant and assassin, piloting a UH-60 Hawk helicopter.

"Logan! Looking for these?!"

Archer makes a few appearances in Syphon Filter 2 . He makes one in the Colorado Mountains while Logan scouts the highway, inside a UH-60 Hawk helicopter. Upon orders, he has his co-pilot fires two missiles at Logan; although Gabe jumps off the mountains to the highway unharmed, he loses his current arsenal.

To cut Logan off from reaching the C-130 crash site, Archer meets with a triggerman on the bridge near the highway to set up several bombs on it and to detonate them on his orders. Logan manages to kill the triggerman and disables each bomb charge. While making his way through the highway tunnels, Gabe meets two of his surviving GI's taken hostage; he kills their captors and they make their way through the tunnel. Eventually they reach another bridge where Logan tells them to stay put until he retrieves the data discs. Archer, angered at how Logan was proving to be difficult, has his co-pilot fires two missiles at the group, but Gabe again jumps out of the way; while the fate of the GI's remain unknown, Logan lands on a passing train.

On the train, Logan makes it through an onslaught of Archer's men and makes his way to the front of the train. Archer, now desperate, orders his co-pilot to fire missiles at a bridge ahead of the track where Logan was headed. Logan makes it to the front and jumps off the train into a helicopter flown by Lian Xing; together they fly off to the C-130 crash site, where she drop Logan off. At the site, Archer manages to obtain theSyphon Filter virus discs before Logan and escapes to where his helicopter is located. Logan hunts him down. When Archer tries to escape with the discs while hanging on the edge of his helicopter, Logan shoots him before he climbs into the aircraft, and Archer plummets to the ground, dead. Logan walks to Archer's dead body and retrieves the discs while Lian arrive in their helicopter to pick Logan up, he gets up and says: "So long, Archer!" as he walks away.

Archer's pre-Agency activities remain classified to most official databases, but during his time with the Agency, he was an elite assassin who carried out at least 10 contracts on foreign agents or targets who were liabiiities that damaged the organisation. He also served alongside Gabriel Logan in Guatemala. During this time, fanatical concerning his personal career, he consistently pushed for higher ranks.

Archer's actions eventually enabled him to be promoted, until he ended up serving as a lieutenant reporting directly to Dillon Morgan. It fell to him to direct Agency squadrons in the pursuit of Gabriel Logan and CBDC soldiers in Colorado. His forces succeeded in eliminating most of the survivors of the C-130 plane crash, but his main target, Logan himself, constantly eluded him. Archer displayed irrational actions during the assignment by bombarding the Rocky Mountains with munitions from his helicopter and destroying numerous bridges simply to stop Logan. Motivated by an attitude that the ends justify the means, he was willing to even sacrifice his own men and considered all Agency forces expendable in the course of the completion of an operation.

Upon locating the C-130 crash site, Archer sent his elite commandos into the area to recover a box with PharCom information. He obtained the data before Logan could reach it, and retreated to his helicopter. In his attempt to escape unscathed, Logan managed to hit him, causing Archer to fall out and leave the data discs for his rival to seize.

"Morgan's issuing the orders, but an old friend is commanding the ground troops. Archer."
"I served with him in Guatemala. He was a young brown-noser bucking for promotion."
"Well, looks like he made it."

Cold-blooded and cunning, Archer crosses moral horizons which most people would generally abide by simply in an attempt to kill Gabe. He was irrational with his mission; his actions included bombarding the Rockies with missiles and causing Logan to lose his arsenal and destroying numerous bridges to stop Gabe from advancing. Considering his men 'expendable', he was willing to temporarily lose his own forces as long as the long-term mission was complete.

Even before he joined the Agency, he consistently attempted to push himself for a higher rank.

Though not really a boss, he does come at the end of the Crash Site level, and can be hard to kill. All you have to do is shoot him in the head (easier said than done - the sniper rifle is best because you can zoom). He falls from the helicopter and you get the discs. If you kill him with one shot, it'll unlock the Jungle level for multiplayer. 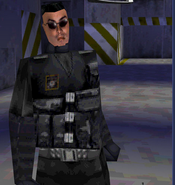